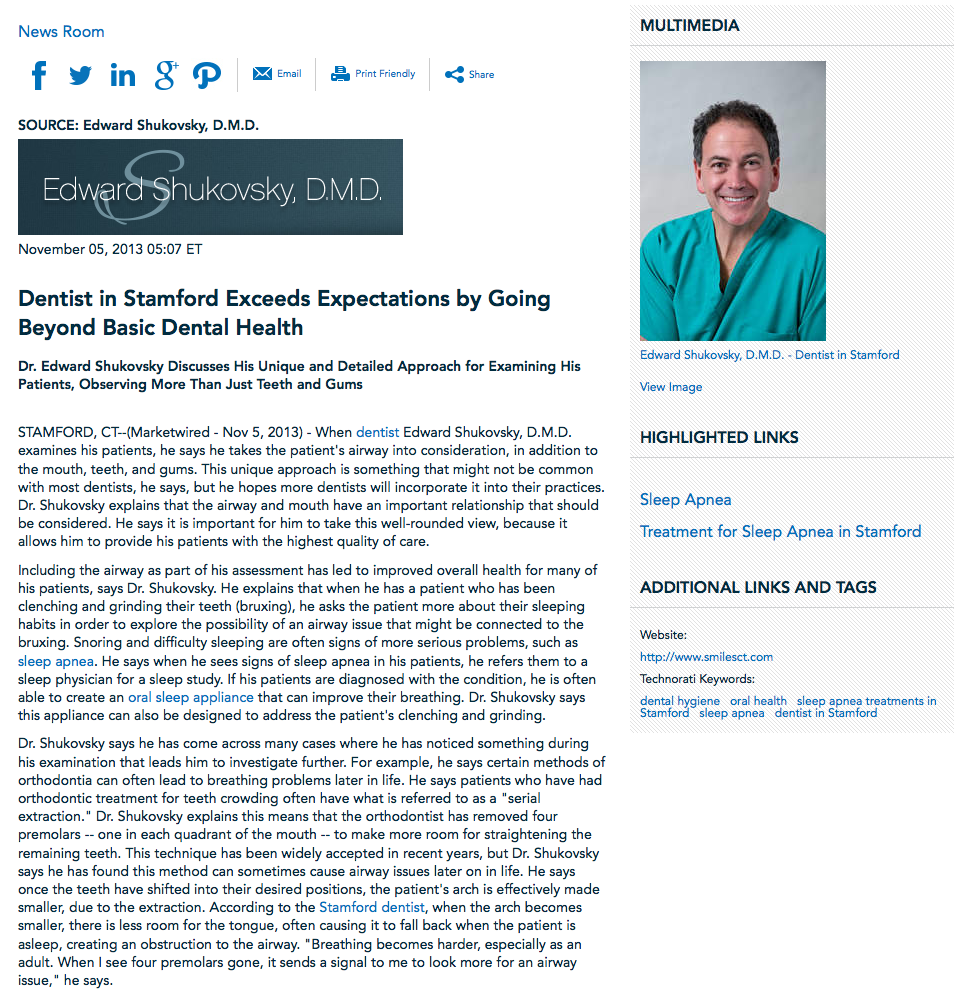 Dr. Edward Shukovsky discusses his unique and detailed approach for examining his patients, observing more than just teeth and gums.

Stamford, CT — When dentist Edward Shukovsky, D.M.D. examines his patients, he says he takes the patient’s airway into consideration, in addition to the mouth, teeth, and gums. This unique approach is something that might not be common with most dentists, he says, but he hopes more dentists will incorporate it into their practices. Dr. Shukovsky explains that the airway and mouth have an important relationship that should be considered. He says it is important for him to take this well-rounded view, because it allows him to provide his patients with the highest quality of care.

Including the airway as part of his assessment has led to improved overall health for many of his patients, says Dr. Shukovsky. He explains that when he has a patient who has been clenching and grinding their teeth (bruxing), he asks the patient more about their sleeping habits in order to explore the possibility of an airway issue that might be connected to the bruxing. Snoring and difficulty sleeping are often signs of more serious problems, such as sleep apnea. He says when he sees signs of sleep apnea in his patients, he refers them to a sleep physician for a sleep study. If his patients are diagnosed with the condition, he is often able to create an oral sleep appliance that can improve their breathing. Dr. Shukovsky says this appliance can also be designed to address the patient’s clenching and grinding.

Dr. Shukovsky says he has come across many cases where he has noticed something during his examination that leads him to investigate further. For example, he says certain methods of orthodontia can often lead to breathing problems later in life. He says patients who have had orthodontic treatment for teeth crowding often have what is referred to as a “serial extraction.” Dr. Shukovsky explains this means that the orthodontist has removed four premolars – one in each quadrant of the mouth – to make more room for straightening the remaining teeth. This technique has been widely accepted in recent years, but Dr. Shukovsky says he has found this method can sometimes cause airway issues later on in life. He says once the teeth have shifted into their desired positions, the patient’s arch is effectively made smaller, due to the extraction. According to the Stamford dentist, when the arch becomes smaller, there is less room for the tongue, often causing it to fall back when the patient is asleep, creating an obstruction to the airway. “Breathing becomes harder, especially as an adult. When I see four premolars gone, it sends a signal to me to look more for an airway issue,” he says.

In the case of one of his young patients, Dr. Shukovsky says he noticed large tonsils, and was told that the patient was snoring, having difficulty waking up, and struggling in school. He suspected the tonsils were causing the issue, and recommended to have them removed, in order to clear the airway. Once the patient’s parents took her to a doctor to have her tonsils removed, Dr. Shukovsky says they reported that their daughter felt much better almost immediately.

Dr. Shukovsky also says he pays close attention to proportion when it comes to his patients’ tonsils. He explains that many younger patients may have breathing issues even if their tonsils do not appear to be very large. He says, “If the tonsils and adenoids are not huge, but the volume available in the airway is small, they don’t have to be huge to make a difference.” He says that even smaller tonsils can create an obstruction in smaller airways, affecting young patients’ ability to sleep, which can also have an effect on their growth and overall health.

Ultimately, Dr. Shukovsky says he believes in taking additional steps to help improve his patients’ well-being, beyond their dental health. He says he feels that by taking the airway into consideration when examining his patients, he is able to provide them with the best possible care.