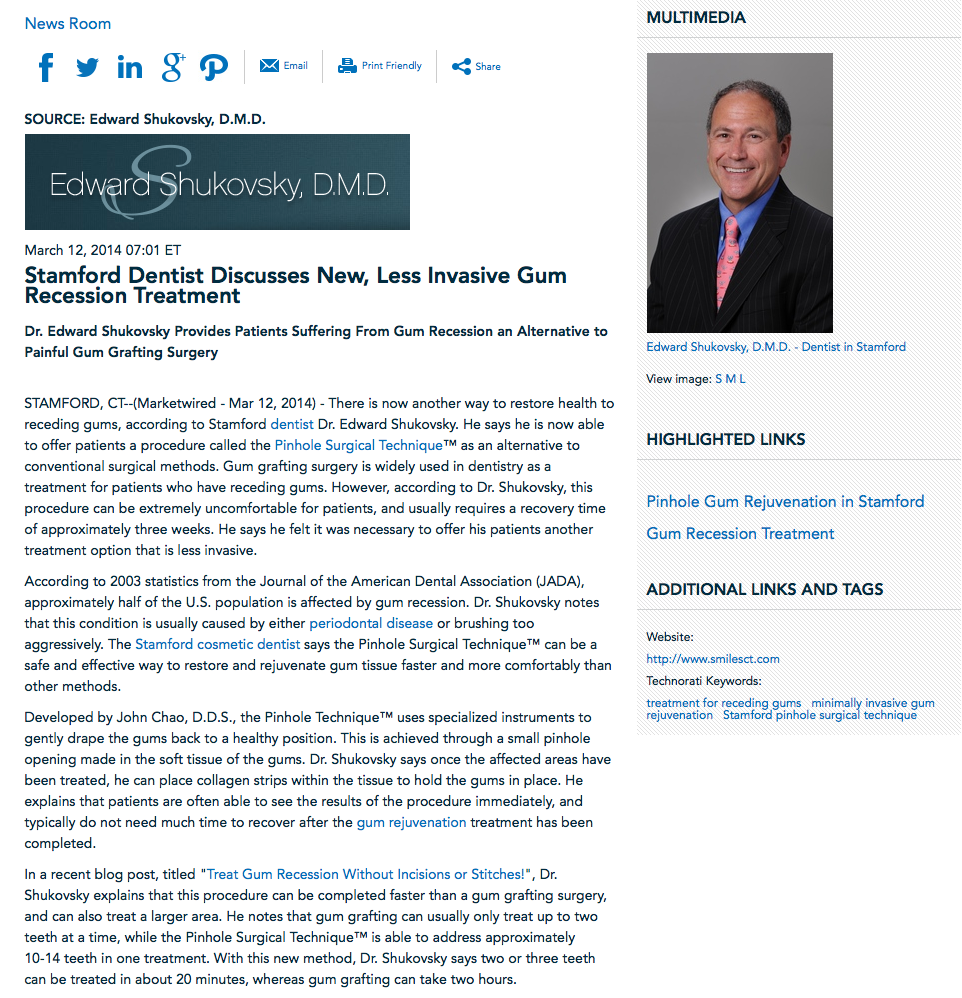 Stamford, CT — There is now another way to restore health to receding gums, according to Stamford dentist Dr. Edward Shukovsky. He says he is now able to offer patients a procedure called the Pinhole Surgical Technique™ as an alternative to conventional surgical methods. Gum grafting surgery is widely used in dentistry as a treatment for patients who have receding gums. However, according to Dr. Shukovsky, this procedure can be extremely uncomfortable for patients, and usually requires a recovery time of approximately three weeks. He says he felt it was necessary to offer his patients another treatment option that is less invasive.

According to 2003 statistics from the Journal of the American Dental Association (JADA), approximately half of the U.S. population is affected by gum recession. Dr. Shukovsky notes that this condition is usually caused by either periodontal disease or brushing too aggressively. The Stamford cosmetic dentist says the Pinhole Surgical Technique™ can be a safe and effective way to restore and rejuvenate gum tissue faster and more comfortably than other methods.

Developed by John Chao, D.D.S., the Pinhole Technique™ uses specialized instruments to gently drape the gums back to a healthy position. This is achieved through a small pinhole opening made in the soft tissue of the gums. Dr. Shukovsky says once the affected areas have been treated, he can place collagen strips within the tissue to hold the gums in place. He explains that patients are often able to see the results of the procedure immediately, and typically do not need much time to recover after the gum rejuvenation treatment has been completed.

In a recent blog post, titled “Treat Gum Recession Without Incisions or Stitches!”, Dr. Shukovsky explains that this procedure can be completed faster than a gum grafting surgery, and can also treat a larger area. He notes that gum grafting can usually only treat up to two teeth at a time, while the Pinhole Surgical Technique™ is able to address approximately 10-14 teeth in one treatment. With this new method, Dr. Shukovsky says two or three teeth can be treated in about 20 minutes, whereas gum grafting can take two hours.

In a conventional gum grafting procedure, healthy tissue is typically removed from the roof of the patient’s mouth. A flap is created where the gums are receding, and the donor tissue is then grafted to the tissue beneath the flap. Stitches are needed at the donor site, as well as to close the flap after grafting has been completed. Dr. Shukovsky explains that the Pinhole Surgical Technique™ does not require incisions, sutures, or stitches, so in most cases, there is significantly less trauma to the tissue, often leading to very minimal downtime after the procedure.

Dr. Shukovsky encourages anyone who might be suffering from gum recession to seek out a dentist trained in the Pinhole Surgical Technique™ for gum rejuvenation and schedule a consultation to see if the treatment is right for them.

Dr. Edward Shukovsky is a graduate of the School of Dental Medicine at the University of Pennsylvania, and is an experienced restorative, general, and cosmetic dentist. He has trained with the renowned Hornbrook Group as well as the Aesthetic Masters, and stays up-to-date on dental technology and treatments through continuing education. Dr. Shukovsky is currently assisting the State of Connecticut Office of Public Health by reviewing cases as needed. He is also a member of the American Dental Association, the American Academy of Cosmetic Dentistry, and several other dental societies and organizations. Dr. Shukovsky is available for interview upon request.